If you work with clay and glazes, you have to do with raw materials which can be harmful to human health. So it is a priority to be aware of these potential hazards, to avoid them if possible and to be able to handle the residual risk. As a manufacturer of glazes, our priority right from the start was clearly to produce lead-free brush-on glazes, because liquids don't raise dust! 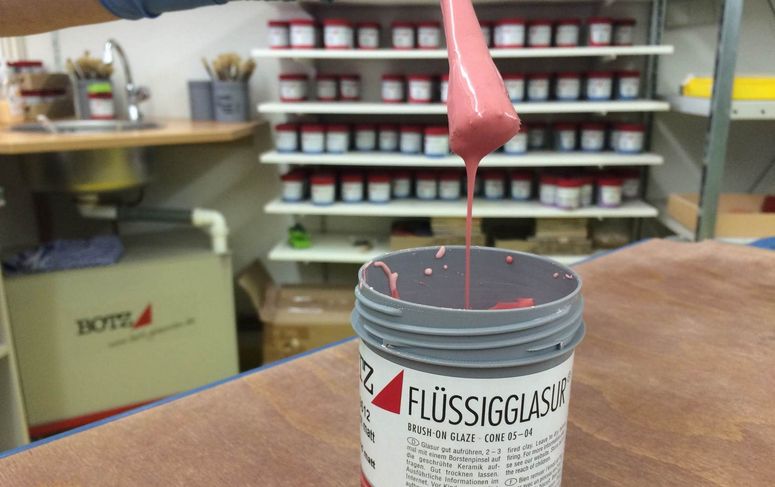 Lead was and still is added to glazes as a fluxing agent in order to reduce the melting point and generate certain effects. If lead enters the body, it can have very unhealthy consequences, particularly as small quantities of lead can also be released from the glaze after firing through low acidity (lead solubility). SKG consequently abstains from the addition of lead for all BOTZ products.

Brush-on glazes have the advantage that they do not make a lot of dust. Clay glazes pose an especially high health risk when you mix them yourself because the fine dust burdens the respiratory tract. On the other hand, you are delivered BOTZ brush-on glazes which are already ready for use without dust exposure.

Cadmium used not be added to our glazes as it is harmful to health in free form. In the meantime, we use cadmium enclosed in zirconium silicate, i.e. it is bonded. The cadmium loss for inclusion pigments is 1000 times lower than for conventional cadmium glazes. Our intense red and orange colours are therefore non-toxic.

Non-toxic means that the product does contain raw materials, but also hazardous substances in a concentration which is deemed non-toxic according to the German Regulations on Hazardous Substances. BOTZ is completely non-toxic

Non-poisonous and poisonous are terms which refer to the dosage of a substance and are inappropriate terms for the glazes sector. For example, selenium can be good for the human body at low concentration, but is extremely harmful in larger quantities. No glaze can be deemed "non-poisonous", however English speakers may refer to products from BOTZ which do not require marking as "non-toxic".

Food-safe is not a term we use in ceramics because the individual conditions of the application and firing of a glaze are also decisive for the possibility of being able to use it for tableware. Some glazes may not contain any toxic substances but, for example as a matt glaze, are not really suitable for crockery and drinking vessels for aesthetic and hygienic reasons. In the earthenware firing range, BOTZ specifically recommends some glazes for the inner sides of tableware which also do not represent a danger even under unfavourable conditions. BOTZ stoneware is fully suitable for tableware (except 9878 and 9897).

All firing generates fumes, irrespective of whether biscuit firing or glaze firing, independent of the type of clay or glaze and manufacturer-independent. These fumes contain carbon monoxide, sulphur dioxide and fluorine compounds for example. Firing fumes are harmful to human health and should not be inhaled if possible. Ensure good ventilation and degassing. There are good air discharge systems from kiln manufacturers or other suppliers which are installed over the firing point. Unpleasant odours can arise when heating some colours at temperatures between 200 and 300°C. The odour may be unpleasant but does not indicate an extra hazard and dissipates at approx. 400°C again. It is less after the glaze has dried through thoroughly (after 1 – 2 days). Basically, avoid staying in the firing room during the firing process!

You can request safety data sheets with all the relevant information about our products directly from BOTZ.

Do you have any further questions on the topic of safety and health? Call us or write to us!